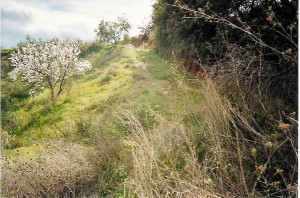 In 2000 We traveled to Spain to look for a piece of land on which we could build our dream home in the sunshine. We had found an ad in the “Dalton’s Weekly” which was advertising plots of land, inland from Marbella in the hills and mountains known as the “Sierra De Las Nieves” which is Spanish for “The snowy mountains” we thought this was an absolutely beautiful area and purchased the land. This was the driveway up to the plateau where the house was to be built. The land was an old Olive farm which hadn’t been worked for over 10 years. 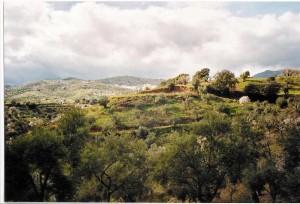 The land had not been driven on or visited for several years and was in a total “Virgin” state. It contained 30 olive trees and in the region of 10 almond trees. there is a stream at the bottom of the valley which runs quite strongly through winter, but all but dries up through summer. Once we cleared a path down to the stream, we discovered several spots which would make beautiful picnic areas by the stream, and we even found a large Cork tree on which we put a rope swing for the children. 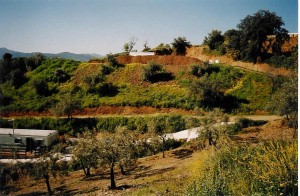 The third photo here shows the mobile home which we had shipped out from the UK on the back of a truck which is where we lived whilst we built the house. the small strip of white at the top of the picture is our 7.5 tonne truck that we bought and drove out containing all of our furniture and household goods. The good thing about buying a truck and moving yourself to another country is that when you arrive at the land it is easy to put the handbrake on, and your mode of transport instantly becomes a storage shed on wheels! 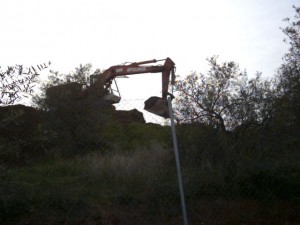 We had probably found the best building firm in the whole of Spain, as when we had the plans completed by an architect, we spoke to the builder and asked him when he could start? he said Next week! Both my wife and I were stunned, as we had expected to have to wait 3 even 6 months, as you have to remember back in 2002 / 2003 there was so much building work going on in Southern Spain that all men and machinery were constantly busy. Next week came, and low and behold there he was with 2 big diggers who got stuck into the ground work, and within a few days we had the biggest hole in the side of our land that we had ever seen. 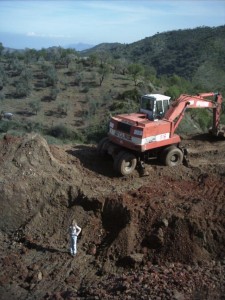 You can see just how big the holes were, as top left is my daughter Katie and myself standing at the top of what is now our ground floor. The photo above right shows Katie standing the hole. The house finally commenced construction soon after these holes were dug in March 2003 when we saw the pouring of the first concrete for the basement floor, as you can see from this photo below……

It was only a few days between each pour of concrete, but what amazed me was that there were 7 concrete trucks to pour the foundation slab alone, now considering each truck brought 6 cubic meters of concrete, that means that we used 42 cubic metres of concrete in all for the basement floor slab! Now I know that our house will never fall over!! The next photo shows the waste water sewage system that I installed with the help of my son Sam.

As you can no doubt see I decided to install not one but 2 soil stacks so that we would always have plenty of access to waste water drainage at each corner of the house. This would make it easy to install kitchens and bathrooms where ever we wanted them. In the photograph to the left you will see closest to you that I have left up turned pipes to take another toilet, sink and shower, this was for a bathroom adjacent to the garage, very handy when working downstairs instead of having to climb flights of stairs to get to a bathroom.

We were very lucky, as we feel that we had found probably the best builder in Spain. I know it is a common myth that all of Spain has the “Manana syndrome” but this definitely wasn’t the case with Cristobal who lived in our local village of Guaro. Once work began, he told us that they would start at 8am, and we can honestly tell you that you could set your watch by these lads, as they were on site and working by 8am. I know a lot of the locals who worked for Cristobal called him a task master, but when you are on our side of the fence, getting the job done and on time was the most important thing to us and he certainly achieved that!

As you can see by this photo, the walls of the basement were reinforced concrete, so the form work was erected by 7 men in 2 days, and that included all the 2 layers of reinforced steel in each section. This construction method was adopted as this section of the house was to be underground, and this wall formation is like a 2nd world war bunker!! the outside of the concrete was painted with bitumen before the earth was back filled.

Once the basement walls were pored the whole construction seemed to go up in no time at all. there were an average of between 7 to 9 workers on site everyday. Cristobal and his cousin Augustine both co owners of the building company were there everyday making sure things went to plan and on time. As you can see the construction had come on leaps and bounds. It was at this stage that My wife and I had realised that we had not payed the builders one penny to date! Now how many companies would trust you to this extent? we had to call a meeting with Cristobal and Augustine and insist that we gave them some kind of payment to which they agreed. I know we hear so many stories and tales of woe from Spain, but in our case we were stunned that these guys had started work and spent so much of their own cash on our construction site and hadn’t yet asked us for any cash!! Incredible.